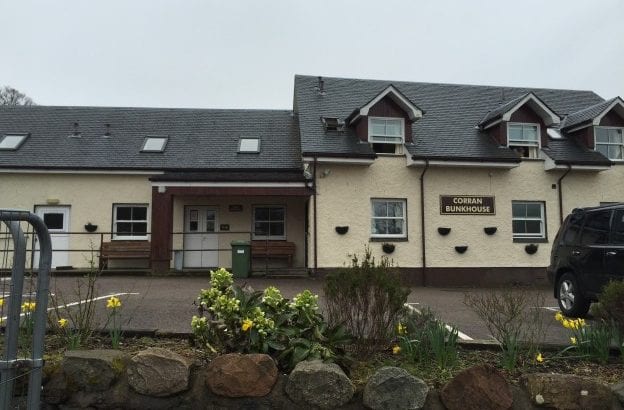 What is a Bunkhouse?

A bunkhouse is similar to a hostel in that it has shared rooms which are basically furnished.  They are used by people who love the outdoors and want to stay in more remote areas.  The term bunkhouse can be used for anything from a simple camping barn to a hostel offering double beds and a cooked breakfast. The Corran Bunkhouse probably stretches this definition as there are no dormitories & all the rooms are private, with televisions and en-suite bathrooms.

Corran Bunkhouse is situated on the West Coast of Scotland in the village of Onich, Fort William and it caught the eye of Alan and Halina Hood when it came up for sale in 2014.  It was originally a guest house but now operates as a 32 bed bunkhouse predominantly for the self-catering traveller. It sits next to the Corran Ferry which crosses Loch Linnhe from Nether Lochaber to Ardgour, at the Corran Narrows, nine miles south of Fort William which is an ideal location for holidaymakers in this part of Scotland. With the Nevis Range, Mamores and Glen Coe all on the doorstep and the Ardgour / Sunart/ Ardnamurchan wilderness straight across the ferry, this is a paradise for walkers, climbers, cyclists, kayakers, skiers & anyone else who loves the outdoors & wildlife. This is Lochaber – the self-proclaimed outdoors capital of the UK & the Corran Bunkhouse is centrally placed within it!

After looking at the property and deciding they wanted to make it their home and business Alan & Halina started to look at ways of financing their dream.  It was suggested to them that they contact us here at Stewart Hindley & Partners to discuss their options.  Alan had a clear vision of how he wanted to improve and operate the business and by working closely with our team a suitable and affordable debt solution was found.  The reality, now that Alan & Halina have been proprietors of the Corran Bunkhouse for over two months, is exceeding their expectations – they have made a quality investment that gives them plenty of opportunities for growth in the future.

We submitted the application to the lender together with a comprehensive business plan and were offered the debt (subject to valuation) within two weeks. This was a complex property transaction, involving purchasing of shares and a special purchase vehicle (SPV) and the loan offered took account of these circumstances.  This did take longer than we had hoped but eventually it was all done and everyone was heading for completion.  Unfortunately, one of the owners was then taken ill and died.  Understandably, Alan and Halina didn’t want to cause the family any undue stress and the purchase took a bit of a back seat until the situation could be reviewed.  It was agreed that the sale would still go ahead and that Alan and Halina would operate the bunkhouse under a management agreement whilst probate and legals were undertaken. This was a stressful time for all concerned but they have now completed their purchase and are very much enjoying life in Scotland.

We are very satisfied with the support that we received from Chris and Carol at Stewart Hindley. Always professional, Stewart Hindley were helpful and proactive in what turned out to be an unusually difficult process. We were truly grateful to have them on our side and we believe that they added a lot to the success of the project, especially in keeping the loan on the table during the delays! Certainly our recommendation to anyone considering doing a transaction like the one we did would be to use Stewart Hindley – definitely a very competent & committed team that is client focused!